This blog entry originally appeared on September 5, 2017 for the Evangelical Environmental Network.

It’s true, everything is bigger in Texas. Especially the storms. The meteorological monster nicknamed “Harvey” doesn’t quite fit the traditional definition of a storm. What we witnessed over southeastern Texas in late August requires a new lexicon, a word salad composed of ALL CAPS! [pullquote2 style=”left” quote=”dark”]There is now compelling evidence that the warming we’re witnessing is turning up the volume on weather extremes, especially hotter heat waves, drier droughts and heavier rainfall amounts[/pullquote2]To be clear, Hurricane Harvey would have formed over the western Gulf of Mexico and wreaked havoc on Texas, regardless of a warming climate. Hurricanes have spun up over bathwater in the tropics since the dawn of time. Even without the highest CO2 levels in 3 million years, rainfall amounts in Houston would have been extreme. But did climate change “juice” the storm even further, did a warmer world super-size Harvey into something almost unrecognizable?

Total Rainfall from Harvey: Map courtesy of Praedictix and AerisWeather. 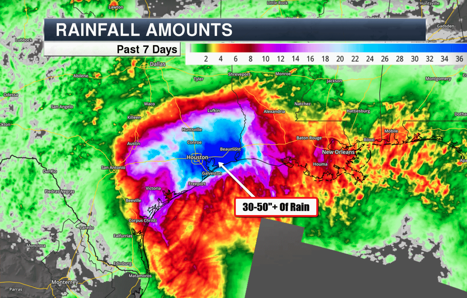 The science of “attribution”, linking extreme weather events to a warmer, wetter, more volatile climate, is still emerging. There is now compelling evidence that the warming we’re witnessing is turning up the volume on weather extremes, especially hotter heat waves, drier droughts and heavier rainfall amounts. A warmer atmosphere holds more water vapor, and water temperatures 1.5C warmer than average in the Gulf of Mexico increased moisture, the rocket fuel available for Harvey to feed on, by as much as 7%. This alone would have increased the odds of a record rainfall event.

Another factor may be in play, one even more insidious. The rhythm of the atmosphere seems…off. Warm season systems are often limping along in slow-motion – sluggish – a greater potential for fronts and storms to get “stuck”. When weather slows or stalls, things can go from bad to worse in a hurry: record heat, rapid intensification of drought, or Old Testament flooding. A rapidly-warming Arctic may be inadvertently impacting jet stream wind speed and configuration, increasing the odds of storms “cutting-off” from the main belt of steering winds high overhead. Once again, a scientific link is emerging, but not yet definitive. One thing is certain: the combined effects of an ex-hurricane stalling over Texas for nearly 5 days and a wetter atmosphere spiking rainfall rates, turned Harvey into something almost otherworldly.

Then again Houston is no stranger to disruptive rains, having experienced three 500-year floods since 2015. Nationwide the National Weather Service counts 25 separate 500-year floods across the United States since 2010. It’s not your imagination: east of the Rockies the rain is falling harder and longer – wet areas are, in fact, trending wetter. Which is what climate models predicted 30 years ago.

Jesus was explicit in Matthew 25:45. “Truly I tell you, whatever you did not do for one of the least of these, you did not do for me.” [pullquote2 style=”right” quote=”dark”]The pain, disruption and dislocation of a rapidly-changing climate will be felt most by the world’s poor.[/pullquote2]Many of us will be able to move away from incessant heat, wildfires, persistent drought and flooding coastlines. The well-to-do will move, build higher walls and flee the worst of an increasingly noxious climate. But the poorest among us won’t have any of these options. They can’t just pick up and move. Their homes are often closer to sea level, more vulnerable to storm surges and inland flooding. In the aftermath of Hurricane Harvey an estimated 70% of homeowners don’t have flood insurance, according to CoreLogic.

The pain, disruption and dislocation of a rapidly-changing climate will be felt most by the world’s poor. That’s why climate volatility and weather disruption is emerging as the global civil rights struggle of the 21st century.

Let’s acknowledge our new climate reality and work together to harden infrastructure; making everything we do more flood-resistant and storm-tolerant. Climate change is a threat, and also an opportunity for innovation and reinvention. As stewards of God’s Creation, we have a spiritual obligation to pay attention, to care for the least of these – and be part of the inevitable solutions.

This blog entry originally appeared on September 5, 2017 for the Evangelical Environmental Network.

Paul Douglas is the Founder and Senior Meteorologist at Praedictix. He is also on the Evangelical Environmental Network Board of Directors.